Gameplay terminology, just as it is in any language, can be interchangeable. A military base/outpost/fortress/stronghold/head quarters/fortification/citadel can be interpreted as close to the same thing, ‘the place where my resources are processed, troops are trained and weapons are made’. A games economy and financial structure goes though the same process as each culture in the world has their own slang for currency.

In Generals Zero Hour, for example, the currency is in $ (USD) no matter which faction you play as. Even China and GLA (Global Liberation Army) use USD as their currency, with as little sense as that actually makes. Regardless of that, I’ve heard players call it something that maters to them, a local phrase or a ‘coining’ of the term, if you will. What starts out as ‘dollars’ gets called everything from cash, stash, dosh, pounds, dukes, ducats and shells to bones, beans, bucks, dough, cheese and notes. It’s this personal identification that makes the transaction more special to them, which I think is a unique thing.

However, how we describe scale isn’t as straightforward. Being in the USA, and using an archaic system of measurements, it can be difficult to have a detailed conversation concerning distance on the battlefield or otherwise. Understand that 1 mile = 5280 feet and 3 feet = 1 yard and 12 inches = 1 foot… omg, why? Alternatively, Metric is significantly easier in this regard, hands down. Everything is multiples of 10 and everything can be easily multiplied and divided in this manner. Easy.

So let’s get back to the topic at hand. Terms can be interchanged, but in terms of measurement, that can be less than helpful, causing more confusion than intended. I want to define the two terms that I’ve heard interchanged the most when I play RTS games with other people: Tactical and Strategic.

tactical – adjective: tac·ti·cal
Relating to or constituting actions carefully planned to gain a specific military end.”as a tactical officer in the field he had no equal”(of bombing or weapons) done or for use in immediate support of military or naval operations.
Source: https://www.lexico.com/en/definition/tactical

strategic – adjective: stra·te·gic
Relating to the identification of long-term or overall aims and interests and the means of achieving them.
Source: https://www.lexico.com/en/definition/strategic

There are other ways to phrase this that may paint a more detailed picture. The board game RISK is a great example of a strategic game. You play the game, as a conqueror and commander of armies, using the entire world as a battlefield and reposition your troops to claim territory, rolling dice to determine the outcomes of battles. You make very broad overall decisions for your armies, choices that resonate on the strategic level. Now, if that was taken one step deeper and you had to give individual commands such as positioning, formation, marching orders, supply paths, and such, then this would be more of a tactical game.

This may also be better explained in terms of micro vs macro management. Let’s take this from the perspective of a manager at a large organization, keeping track of a few dozen workers. In a macromanagement situation (strategic), you might have a very broad set goals for everyone you oversee, such as trying to complete a few projects by the end of the year. This is something that CEOs do often, a big speech with the goal of setting the general direction of an organization, but not explaining all of the finer points. In terms of micromanagement (tactical) you may assign individual people to individual roles in those projects, comparing their strengths and weaknesses.

I think that’s one dead horse, but the distinction between tactical and strategic can be really important especially if you are trying to talk about a war or an individual battle. I hope this article helps you ensure that you and your fellow field commanders stay on the same page and keep fighting the good fight. 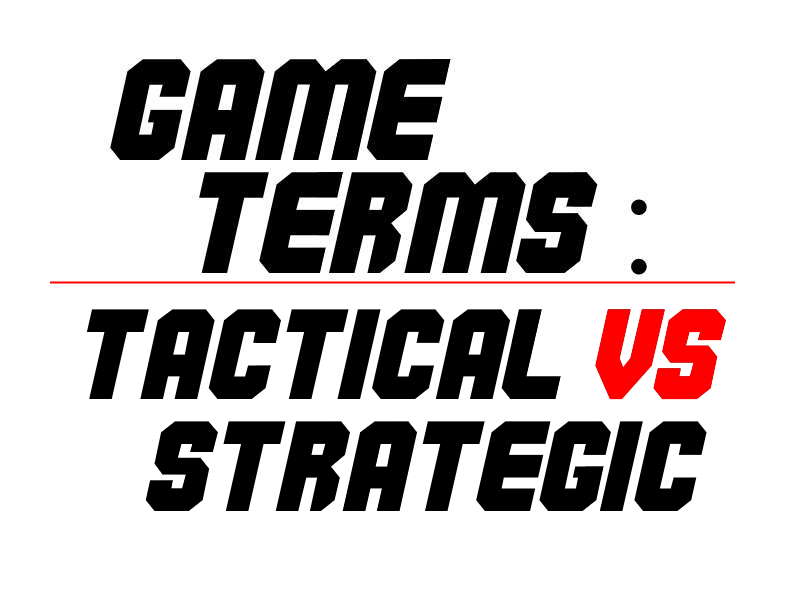